With the city bursting at its seams, the Mayor announced that the Department of Works & Housing and the DOT will be embarking on a massive project to reclaim land along the coast to allow for the expansion of the city. As part of this project, a wind farm will be created to exploit the seasonal winds that come in from the coast. The City’s Green Initiative promises to achieve 75% clean energy by 2030 and, to do so, it is willing to consider available sources of sustainable energy, including wind and solar.
The reclaimed land will serve the dual purpose of:

• Coastal erosion protection. Recent fluctuations in the tides coupled with soft alluvial soils further offshore and brackish (mix of fresh & salt) water means that the coastal areas of the city are highly susceptible to coastal erosion. Reclaiming the land on the southern parts of the city stabilizes the soil and makes it more erosion resistant.

• A field for a wind farm of noise-friendly turbine towers. The reclaimed land is far enough from the city and residential areas as well as close enough to the shore to catch the offshore wind. This will significantly boost the sustainable energy quota for the city, makes the city less reliant on fossil fuels, and leaves a smaller carbon print. 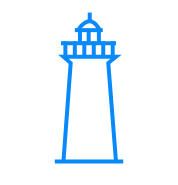